This year has been a maelstrom of things happening to me personally, some of which have changed my life considerably. Regardless, they have not seriously hampered the development of the game. I even finished my first D&D campaign I DMed for 2+ years for eight(!) people, that was fun.

The technical side of game development has been hindered by Adobe AIR support vanishing and overall it becoming more and more of a nuisance. Progress to the next update has been severely affected by this development, and some drastic measures have been taken to ensure V3 can actually be installed and run when it's released.

The development version of the Teraurge V3 currently runs on the Unity engine. I had been working semi-seriously on an Unity version of the game as precautionary thing along with the AIR version, but irreconcilable technical hurdles forced the issue and I had to take the plunge into the Unity for V3.

The switch has been a big effort but the new tools Unity and C# bring to the table have made the development far more enjoyable and efficient than what it was on the Flash Actionscript 3. Large sections of the game's code have been translated into the new engine, but various parts are still missing.

The news of an engine change may sound dire or irritating, but I already delayed the engine switch (probably) far too long and only did so when the issue was forced upon me. The engine change has brought new possibilities in the technical sense and made the development far less troublesome. I changed to Unity with great hesitation and dread, but I've come to realize that I should have made the jump to Unity in V2, or even earlier.

As is tradition I've created a new super pack of all the stream art for your convenience.

I can't stress enough how humbled I am with your patience with me.

I am still very much working on V3, and I can hopefully deliver it in the coming year. The extreme amount of time spent on V3 has happened because of a mess of trial and error gameplay coding I had been doing to improve the overall experience, combined with the usual problems with writing. Fortunately updates should come much quicker in the future, since I feel confident that I won't have to fiddle around with the guts of the code or the gameplay in a while. One messy writing thing I've been struggling with is deciding what characters to focus on. Juggling between creating new stuff and expanding existing characters is difficult, since basically all characters have their advocates that wish more content for them. Regardless, I will do my best to round off all the characters in a way that doesn't leave them dangling narratively. The stream theme experiment has yielded good results for the long term development of the game in the form of backgrounds, sprites and inspired writing that often takes place after the streams. The fruits of the streams will not be seen in V3, but they'll have an effect in all of the future updates. I've once again created a new super pack of all the stream art for your convenience. It's a poor replacement for V3, but I wish my commitment to the regular streams will uphold the trust necessary for such a long project. 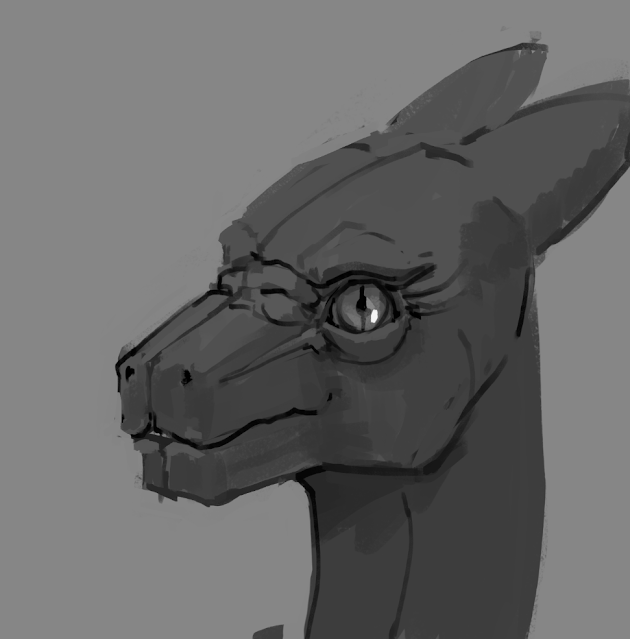 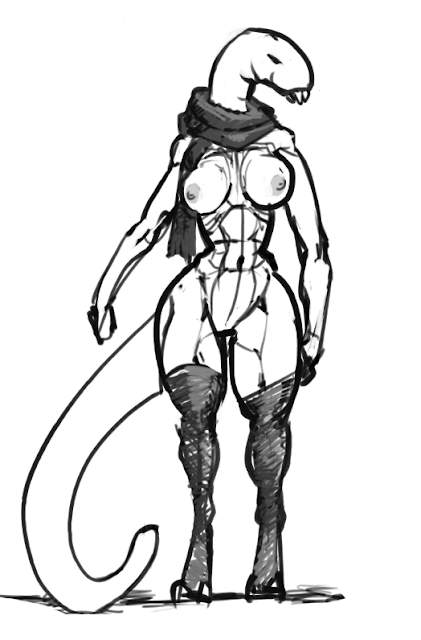 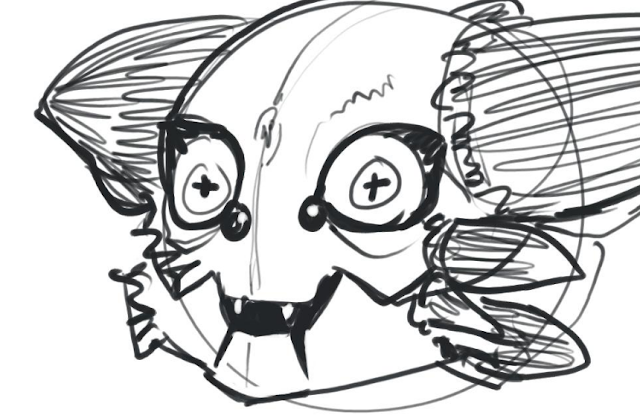 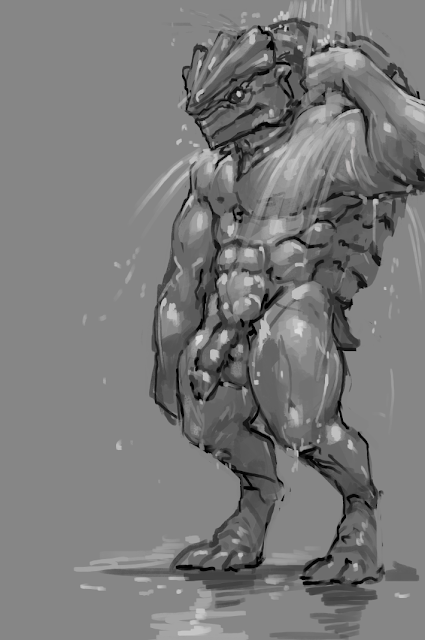 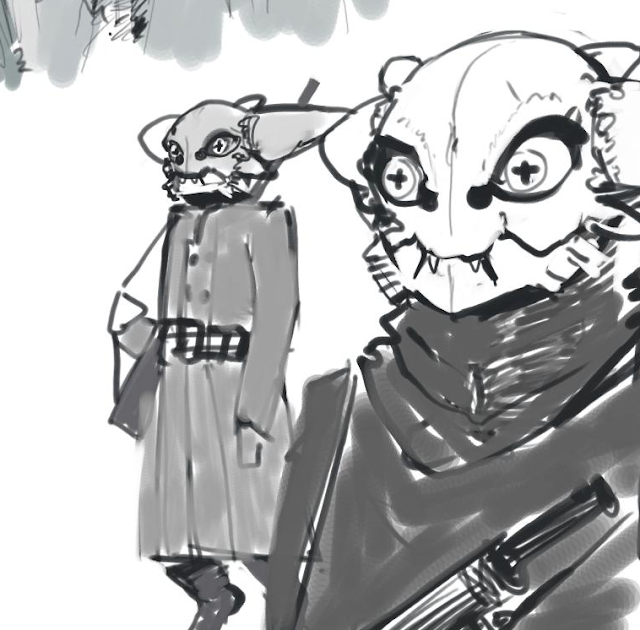 Posting irregularities
This is more of a proof of life post, v3 is still being worked on, (also make Proventus a mod).
12 comments:

Stream TU stuff
The idea of drawing TU backgrounds and sprites on my Picarto stream has been a big boon. I've collected the backgrounds and sprites that have been produced during the streams here. Note that this doesn't include concept art or other full color images created during the streams. All of these pictures and the missing ones are available in the stream picture dumps that are posted on my Twitter and Patreon.
All of these sprites and backgrounds could be fully usable in the game with some detailing and finishing touches. The streams based on the locations in the game world have also created good palettes and concepts for different ideas to source from when working on those locations. These streams have been such a valuable thing for the development of the game and the world that they're probably here to stay.
6 comments:

To anyone wondering why there was a long pause between the blog posts, I was just on a vacation. In hindsight it wasn't that smart not to notify about it on the blog as well, since my Patreon page and the blog probably have some differences in audiences. I'm back now, and I'll be doing the normal weekly and biweekly things as before. And yes, I am still working on V3.
Contributor help hardships
Some people may have noticed that I've recently had trouble responding, or just didn't respond to emails sent to me. It's actually caused by a rather unfortunate issue of time, energy and value.
When I started developing Teraurge, I naively thought that I could help other writers and vet their writing just by having them send me their stuff via email. This did happen for a short time, but it soon became evident that even a small number of writers is just too much work to handle for me, because of the uneven quality and amount of learning needed from the writers, and my lack of time to coach them properly.
I did persevere with a few writers in the beginning and tried to push the things they were writing to completion, but I either lost contact with them, or the writers became disillusioned/stressed/uninterested in the writing process and their writing projects never got finished. After several of these writers abandoned their efforts despite my help and critique, I became disillusioned with the process, as the opportunity value spent on helping writers became very, very slim. It seriously sapped my own enthusiasm about the idea.
For a long time I wasn't sure what went wrong, or what I was doing wrong. Eventually I did realize what the issue was, but I ignored it in hopes of making it work. But in the end it's simply a logistical issue of a single person trying to do too many things at the same time, and dividing their attention between many complex tasks.
Anyone of you who did write and send emails to me and never heard back; I appreciate the interest and I wish I could have worked with everyone to put content into the game, but it just wasn't realistically possible. As it stands I cannot help contributors over email but I would still like to implement possible contributor content if it has already been finished and meets the guideline standards.
8 comments:

Still working on V3.
Combat cards
Teraurge V3 will have a rejiggered combat system, and one of its main features are the different cards player can obtain. The overall system has not changed from V2. You use your attributes as fuel for your cards and you whack each other on different turns as usual.
Getting new cards by equipping weapons/items or with training is the main way to become more proficient in combat in TU. Getting resistances by equipping armor/items is another.
The general idea is to avoid number inflation, so to keep the numbers as low as possible in terms of damage dealt and the hitpoints of combatants. For this reason it is actually impossible for the player to gain more hitpoints beyond the starting amount gained from the endurance attribute. This "number minimalism" also extends to the combat cards. The card damage values start from 1 and go from there. This will make balancing less of a headache, and I find that adjusting hitpoints is easier than adjusting the damage cards deal.
Because of how the resistances work (they just deduct the specified amount from the damage type), very low numbers still have a large effect on the overall damage output. It also means that exotic damage types are more valuable than more common ones, so one point of fire damage can be more useful than two points of slashing damage, because the slashing damage is more often resisted by enemies.
I also want to avoid leaving in an "ideal strategy", where a single deck configuration can beat all enemies in the game. The resistances and damage types are there exactly for that reason. Really tough encounters should require the player to specifically tweak their deck to win that fight.
PS: Combat card graphics are a strange beast. It's very different from the normal character/scene painting I'm used to, since it needs to communicate an action in a more symbolic way. I think I need some more practice with the style before I'm happy with them, but for now V3 can suffer the simple card art.